In 1927, the Freibauer family, owners of Western Shoe Company, established the Bauer company as it is known today in Kitchener, Ontario.

Bauer was the first hockey company to begin producing hockey skates in which the blade was permanently secured to the boot. The boot was made by Bauer and the skate blade by the now-defunct Starr Manufacturing Company in Dartmouth, Nova Scotia. This innovation was originally marketed under the trade name "Bauer Supreme".

The arrival of the George Tackaberry boot, made by CCM under the "Tacks" trademark (the Tackaberry name having been acquired by CCM in 1937) saw a shift in the balance of power. The Tackaberry boot with CCM Pro-Lite blade would be worn by all NHL scoring champions from 1939 through 1969. The "Tacks" series of CCM skates would later be retired by Reebok in 2006.

The Bauer name returned to prominence after the company undertook a pioneering step of paying superstar Bobby Hull to endorse their skates. This move, and the introduction soon after of the TUUK chassis, ushered in a new era for the company.

The current National Hockey League rule banning the use of fancy skates was introduced on September 24, 1927. At the time, this effectively outlawed all skates other than tube skates. The plastic/rubber stopper seen on the heel of later tube skates was developed by CCM in 1960 following an injury to the Montreal Canadiens' Maurice "Rocket" Richard in the 1958–59 season. It was made mandatory by the NHL in 1964.

Then in the early 1970s, Jim Roberts, also of the Canadiens, began wearing the now famous TUUK blade. High-profile teammates Guy Lafleur, Steve Shutt and Jacques Lemaire soon followed. The success of this blade chassis was such that by 1995, the various Canstar skate brands (Micron, Bauer, etc.) had a 70% NHL market share while their TUUK and ICM holders combined for a 95% share. (Note: Bauer no longer offers the ICM holder on player skates, although it is still offered with goalie skates, in addition to the TUUK cowling.)

In 1994, Bauer began producing the perforated TUUK chassis, which is the piece of equipment that connects the steel blade to the actual boot of the skate. This revolutionized the sport of hockey[citation needed] because it allowed skates to be made lighter, as well as more durable. 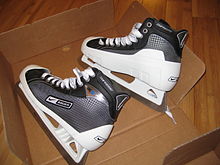 In 1994, Canstar, the parent company of Bauer, became a wholly owned subsidiary of Nike.[3] In 2006, beginning with the release of the Nike Bauer Supreme One90, the company's products were rebranded as Nike Bauer. This was the first time Nike had ever used a partner brand name on a product. Nike sold the company to investors Roustan, Inc. and Kohlberg & Co., on February 21, 2008 and the company is once again known as Bauer.[4]

On September 25, 2008, Bauer announced the purchase of rival Mission-Itech.[5] Mission and Itech gear was rebranded as Bauer beginning in 2009.